C.A.L.A. -Comité d’Aide aux Lépreux d’Antalaha (Leprosy Relief Committee of Antalaha) is a committee that aids former leprosy patients as well as their families in Madagascar.

During the French colonization, the lepers of the region were settled in Antsahanimajy and Mahevadoany to avoid the contamination and to follow their treatments. The authorities of the 1st Malagasy Republic continued to assist them. These people affected by leprosy have all been cured but are disabled for life as a result of the disease. They have remained in these two villages but, poor and handicapped, they have been rejected by the population and unfortunately, they are not the priorities of the local authorities. This is where the foundation C.A.L.A. was founded in 1989.

We are still located the same villages, now called Jules and Belfort. Generally, once the patients are healed, they do not want to return to the bush and so their families end up joining them at one of the two villages. 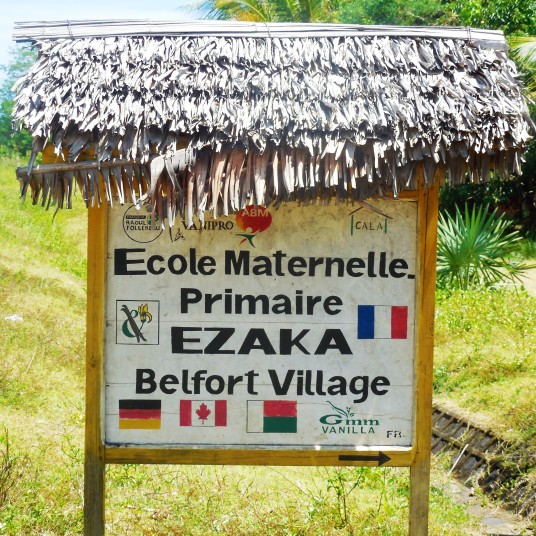 C.A.L.A. is determined to reintegrate these victims socially within regular society, so jobs had to be created to avoid permanent assistance. Their return to work is essential, and some are physically disabled because of their former status. Villagers generally can not find work as leprosy creates fear in people, still to this day. This is where MACOLLINE was born; a botanical park, open to the public, that created nurseries for trees and plants and maintenance jobs on site! MACOLLINE was created by Marie-Helene Kam Hyo as an extension of C.A.L.A.

MACOLLINE botanical park is now also an educational forest that equips the C.A.L.A. school, and the whole region, with a tool to raise awareness for the protection of biodiversity. 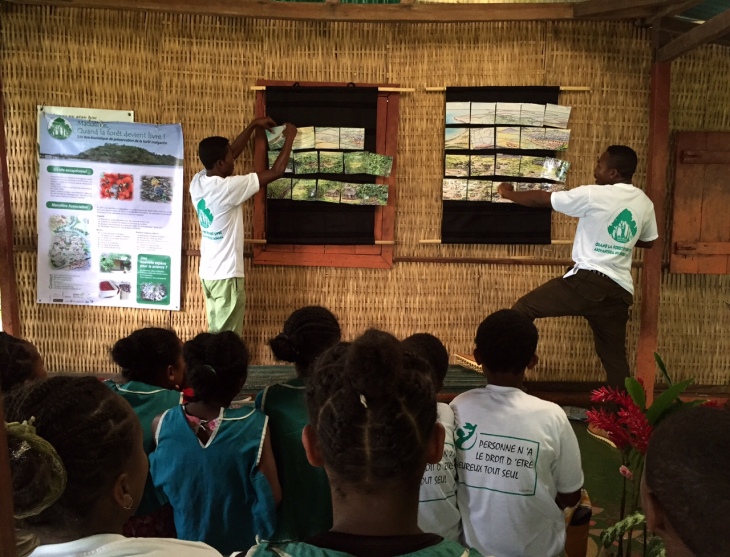 Reforestation projects on the coast have been a success as planted species that grow in the sand are specifically for the protection from cyclones. This creates income for the villagers as they work diligently at maintaining these well-kept plantations. 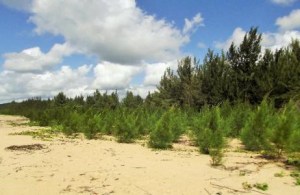 Today the two villages have private schools because children were excluded from public schools in the past. Children born to parents do not inherit the disease yet still, the fear is there.

C.A.L.A. started with an elementary and nursery school reserved for children of the village but over the years we are faced with such an influx of registration from outside that we have to limit the number of students to 300. One of the reasons that parents now send their children to our villages for school is that we are the only ones in the region with a lunch canteen and that idea attracts parents from all over the community. So, integration is working!

As well, in the last couple of years, students at C.A.L.A. have produced excellent report card results. The surrounding villages have gradually realized that our children and their parents no longer transmit leprosy and their children can safely integrate.

We have also recently started an educational vegetable garden to improve the menu of the canteen.

Some examples of former patients that are now working are:

BePaul paddles the canoes for Macolline and helps plant and maintain trees! 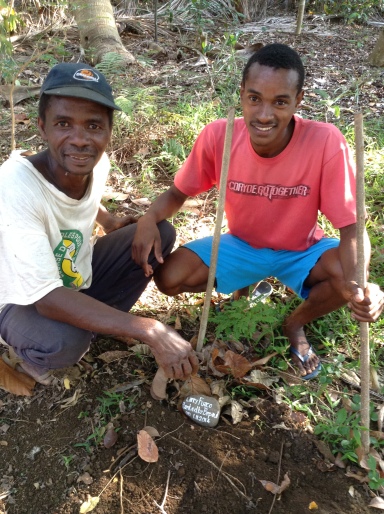 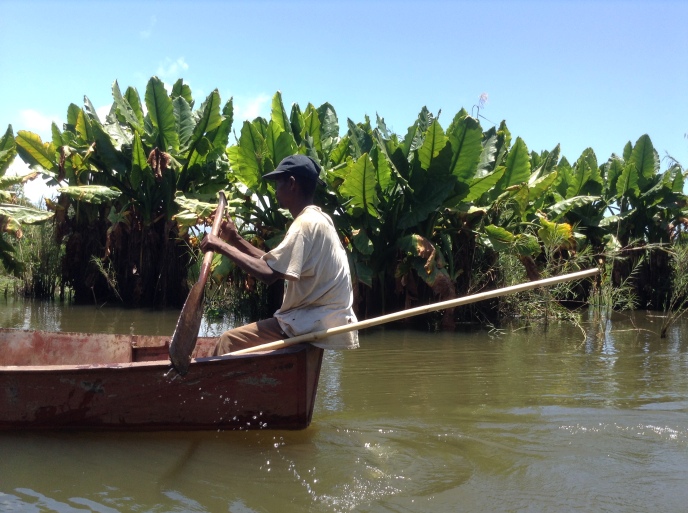 Josiane manages the tree nursery by planting seeds as well as watering each seedling and caring for its growth! 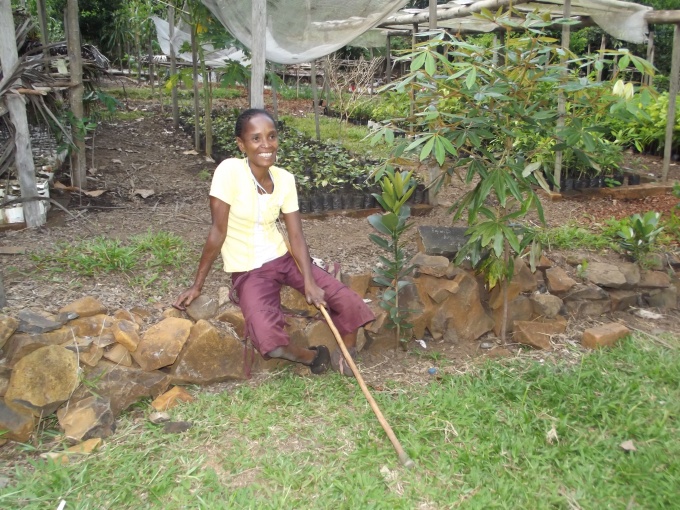 Fred is the village chief, he makes sure that the village is kept clean and that everybody participates equally! Here he is with his granddaughter Christiana.

Célestin grows clove plants and coffee and then sells them! 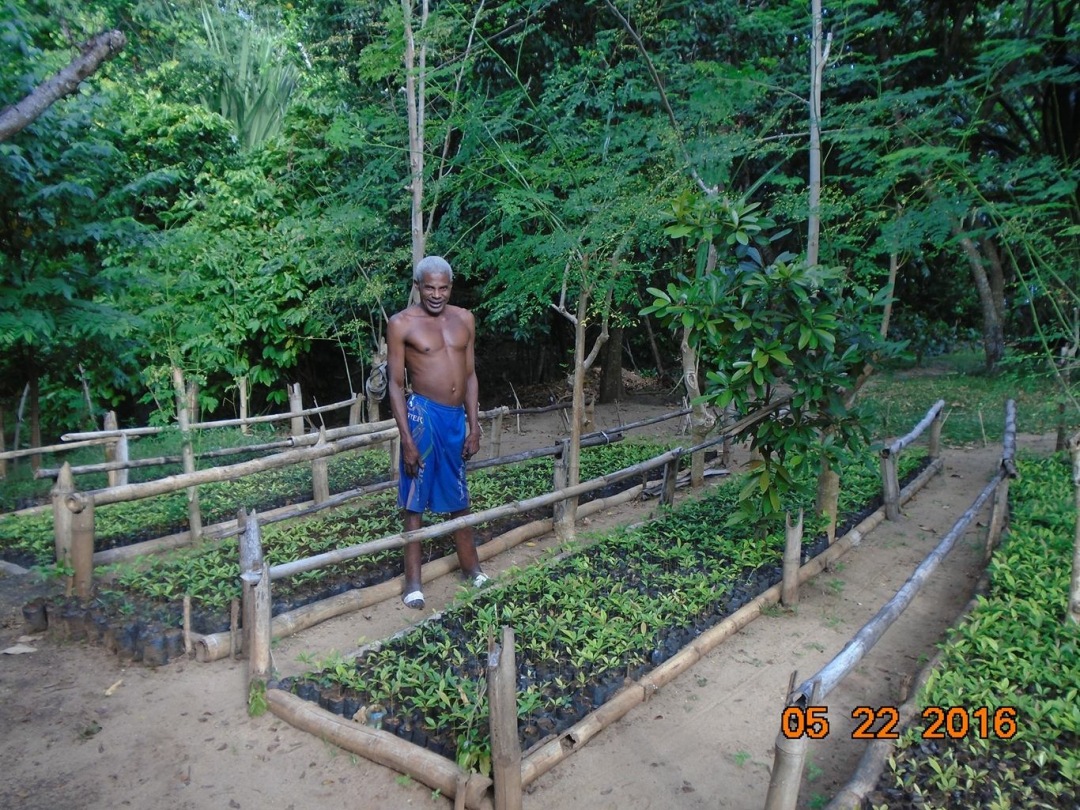